Introduction to the BGV encryption scheme

The BGV scheme is another FHE scheme that belongs to the second generation of FHE schemes. Its security stems from the hardness of the Ring-Learning with Errors (RLWE) problem [LPR13].

One crucial notion in RLWE-based FHE schemes is the error, also known as noise, that is added to the plaintext message during encryption. The error is crucial to satisfy the RLWE hardness assumptions, or else the RLWE would turn into an easy computational problem that can be solved by commodity computing machines and as a result, it would render FHE schemes built on such easy problems easy to break. Recall that in BFV, the error magnitude grows as we perform homomorphic evaluations (mainly, homomorphic addition and homomorphic multiplication). BGV exhibits similar noise behaviour, i.e., error resulting from homomorphic addition grows at a lower rate than that due to homomorphic multiplication.

So far we talked about the similarities between BFV and BGV. In the following paragraphs, we describe how the two schemes are different. Firstly, the BFV scheme is typically scale-invariant (or scale-independent), that is, the ciphertext modulus does not change during homomorphic evaluation. On the other hand, BGV is a scale-dependent scheme that defines multiple ciphertext moduli, one modulus per level. As we can see in Figure 1, BGV defines a chain of "small" moduli $\mathcal{Q} = \{ p_0, p_1, \ldots, p_L \}$. Associated with each level $ 0\leq l \leq L$, is a ciphertext big modulus $q_l$. Note that the choice of the small moduli $p_l$'s and consequently the set of big moduli $q_l$'s is not arbitrary and the rationale behind that will become evident later in this article. While performing the homomorphic computation, ciphertexts keep moving from one level to another. The typical flow of ciphertexts is as follows: a freshly encrypted ciphertext starts at level $L$, which we call the encryption level for demonstration. As we compute on the ciphertext, it moves from a higher level $l$ to lower level $l-1$. Eventually and right before decryption, the ciphertext is at level $1$. It should be remarked that the aforementioned downward-restricted flow is the typical flow in the levelled-version of BGV. In $\textit{bootstrappable}$ BGV, the ciphertext can move in both directions (upward or downward) as necessary.

We note that the previous description with fixed levels for encryption and decryption is rather simplified as it is possible to encrypt or decrypt at any level $ 0\leq l \leq L$. It should also be noted that the BFV scheme can also be instantiated as a scale-dependent scheme, which makes this difference between the two schemes controversial.


Another less controversial difference between BFV and BGV is the ciphertext structure and how the plaintext message is encrypted. Figure 2 shows the ciphertext structure of BFV and BGV. In the former, the plaintext message is placed towards the Most Significant Bits (MSB) side of the ciphertext coefficient. This is done by scaling the message by the rather large value $\Delta = \lfloor \frac{q}{t} \rfloor$ during encryption. On the other hand, BGV places the message towards the Least Significant Bits (LSB) side of the ciphertext coefficient. It is important that during homomorphic evaluation, the plaintext and noise never overlap so that decryption can recover the expected computation result. 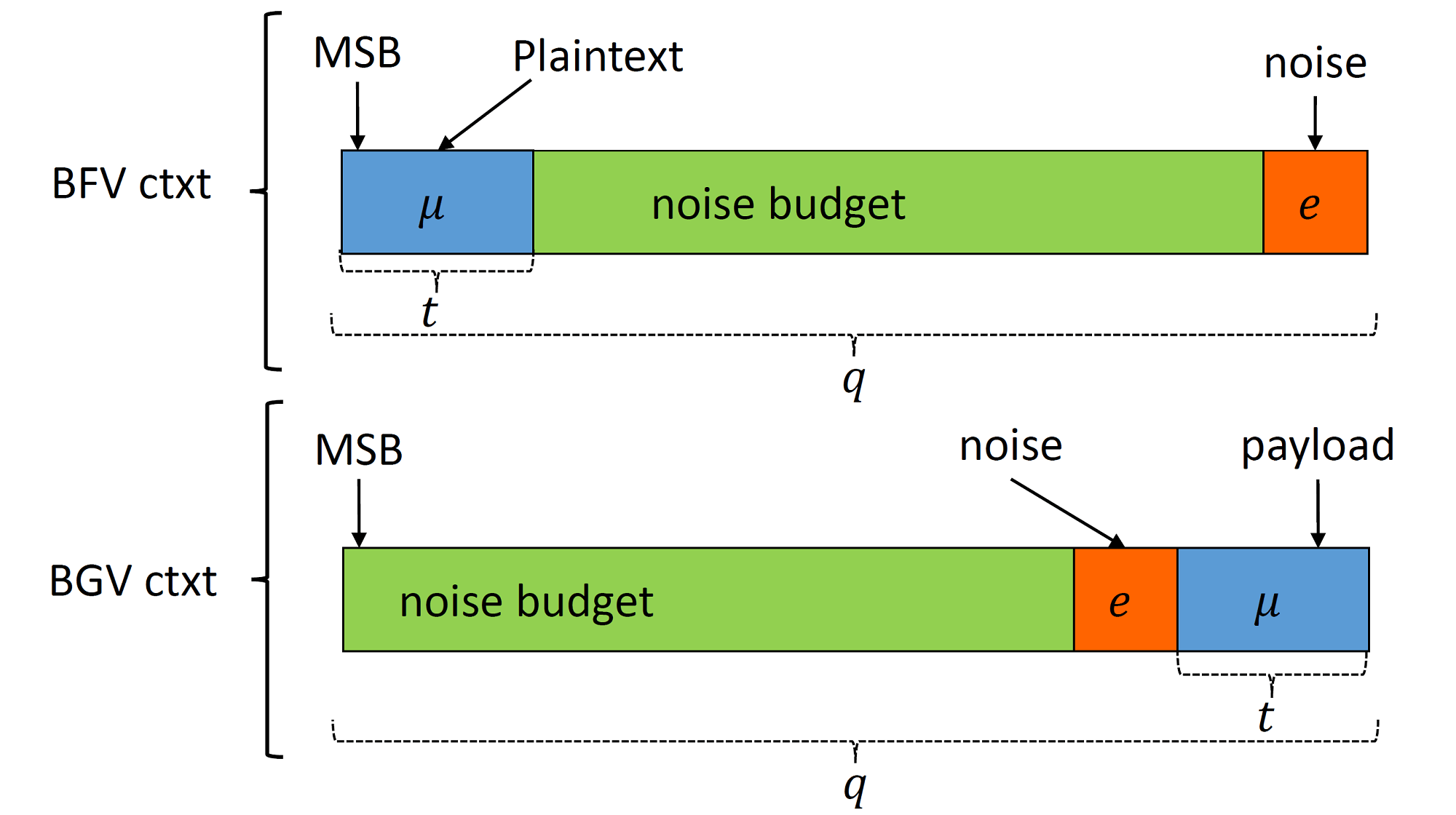 Figure 2: Ciphertext structure in BFV and BGV. MSB stands for most significant bit, $q$ is the ciphertext modulus and $t$ is the plaintext modulus. Adapted from [CKKS17].


In the subsequent sections, we dive deeper into BGV and describe its plaintext and ciphertext spaces, parameters, and the basic cryptographic primitives; key generation, encryption, decryption, homomorphic evaluation, modulus switching and security analysis.

The plaintext and ciphertext spaces of BGV are similar to those in BFV. The plaintext polynomial ring is defined as $\P = R_t = \Z_t[x]/(x^n+1)$, i.e., the set of polynomials with degree less than $n$ and coefficients in $\Z_t$, where the plaintext modulus $t$ and the ring dimension $n$ are both integers. The ciphertext space is defined as $\C = R_{q_l} \times R_{q_l}$, where $R_{q_l} = \Z_{q_l}[x]/(x^n+1)$ and $q_l \in \Z$ is the ciphertext modulus at level $l$. For efficiency purposes, $n$ is usually set as a power-of-2 integer similar to our discussion on BFV. Also, $q$ is usually much greater than $t$ which affects the message expansion rate after encryption. There are security and functionality constraints that should be considered when setting up these parameters. The reader is advised to refer to the homomorphic encryption standard document for a set of recommended parameters [ACC+18].

In addition to the plaintext and ciphertext parameters, BGV defines the following three random distributions:

Similar to our discussion in BFV, the input data needs to be encoded to be compatible with the plaintext space $R_t$. We refer the reader to our description of BFV in which we introduced two encoding schemes. They can also be used with BGV without any modification.


What differentiates FHE from classic encryption schemes are the homomorphic evaluation procedures. Here we study the two main homomorphic operations: addition and multiplication.

Homomorphic multiplication takes as input two ciphertexts $\textsf{C}^{(1)}$ and $\textsf{C}^{(2)}$ defined with respect to the same modulus $q_l$ and returns a ciphertext ($\textsf{C}_3$) that contains an encryption of the product of the two plaintext messages encrypted in the input ciphertexts, that is, $\textsf{Decryption}(\textsf{C}_3, \textsf{SK}) = \textsf{M}_1 \cdot \textsf{M}_2 \mod t$.

As mentioned previously, $\textsf{ModSwitch}$ is used to control the multiplication noise. This notion was first introduced in [BGV14], and it exploits the fact that given a ciphertext $\textsf{C}$ defined with respect to modulus $q$ and secret key $\textsf{SK}$, it can be transformed into an equivalent ciphertext $\textsf{C}'$ defined with respect to another modulus $q'$ and the same secret key $\textsf{SK}$ such that: \begin{equation} [\textsf{C}(\textsf{SK})]_q = [\textsf{C}'(\textsf{SK})]_{q'} \end{equation}
The transformation is done by scaling the coefficients of $\textsf{C}$ by the quantity $q'/q$ and some suitable rounding. To reduce the noise magnitude, we choose a fairly smaller $q'$ than $q$, which allows us to scale down the multiplication noise.

Note that in the BGV context, $q$ can be at any level $l$, i.e., $q_l$; and $q'$ in this context is simply $q_{l-1}$. Moreover, the ciphertext moduli $q_l,~\forall~0\leq l \leq L$ are chosen such that they are equivalent modulo $t$. This results in scaling down the noise without affecting the encrypted plaintext message. It is as if we are scaling by 1 from the plaintext perspective.

$\textsf{ModSwitch}$ can be computed as shown in Equation \eqref{eq:mod:switch}, where $[\cdot]$ is a suitable rounding function. The transformed ciphertext $\textsf{C}'$ is defined with respect to the new modulus $q'$. \begin{equation}\label{eq:mod:switch} \textsf{C}' = \big[ \dfrac{q'}{q} \cdot \textsf{C} \big] \end{equation}

10. Security of the Scheme

To the best of our knowledge, BGV is still considered a secure scheme with no known attacks published in the literature. Its security stems from the hardness of the RLWE problem. We remark that choosing optimal BGV parameters that maximize performance and respect both security and functionality constraints is a fairly complex task and it is best to consult expert cryptographers to do so. For a brief security analysis and a set of recommended parameters for BGV (and other FHE schemes), we refer the reader to the homomorphic encryption standard [ACC+18].

Enter the information below. Please contact us if you have issues with logging in.